It’s time for another feature update for KDE Connect!

You can now run commands on connected devices from the Plasmoid. 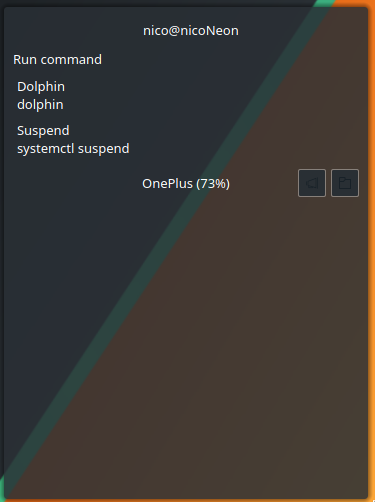 The Dolphin context menu entry for sending files to a connected device has been dropped in favour of a Purpose plugin, which groups nicely with other Share features and supports more apps such as Okular and Spectacle.

Albert Vaka added a presentation mode to Android which allows you to control slideshows from your phone. Aleix Pol added the same to the Kirigami app.

As I’ve mentioned before it is quite hard to find the settings where you can define your commands for the Run Command feature.  The command list on Android now has a button that opens the appropriate settings on the desktop. Ivan Čukić added a few useful command suggestions to the menu.

Friedrich Kossebau added support for a “Find my PC” plugin. You might wonder now how often he loses his PC, but it also helps finding other devices that run the C++ version of KDE Connect, such as Plasma Mobile and SailfishOS devices. I added support for triggering it on the Android side.

Following a request on Reddit I added a dedicated Stop button to the media controller.

Chansol Yang made sure that the pointer speed when controlling the mouse from the phone is the same across Android devices with various DPIs.

You can now use special URLs to trigger commands on connected devices. The urls have the form kdeconnect://runcommand/<deviceid>/<commandid>. As those are quite complex I added a helper for it. You can copy an URL to the clipboard by long-pressing a command in the command list. You can write those URLs into a NFC tag to trigger the command when your phone reads the tag or use it to integrate with services such as Tasker.

The system volume patches have been merged. To make use of it you will need the latest KDE Connect from master for Desktop and Android and pulseaudio-qt installed. You can get pulseaudio-qt from git. We will to an initial 0.1 release soon and hope that distros will ship it soon.

Besides these features we also fixed some bugs and polished the UI a little.

Bluetooth support is progressing slowly. Matthijs Tijnk and Qt 5.11 fixed some issues. However, it is still not ready for the public.

We also improved our device support:

Aleix and I improved the Kirigami app. We improved the basic pairing workflow and  you can now run commands and control media sessions.

Bart Ribbers fixed an issue that was blocking KDE Connect from building it for postmarketOS. I hope to see KDE Connect there as well!

Adam Pigg made a huge step towards bringing KDE Connect to Sailfish OS.

We like to see KDE Connect on as many platforms as possible, and we need your help for it! Our workboard contains lots of ideas for new people to get started. You can ask for any assistance in our Telegram group.

Thanks to all contributors!

View all posts by nicolasfella